In 2020, the solemnity of the Sacred Heart of Jesus (and the World Day of Prayer for Priests) falls on Friday, June 19:

The annual Global Rosary Relay for the sanctification of priests on the Feast of the Sacred Heart of Jesus [takes place] on 19 June 2020, when we encircle the world in prayer once again. In this its eleventh year, [there are] more prayer locations than ever taking part in what is now recognised as a truly significant and powerful devotional initiative within the Catholic Church to recognise and bless the work of priests serving the faithful the world over.

Each of the participating prayer locations in 85+ countries prays a particular mystery of the Rosary at a particular half hour on the day in thanksgiving to God for our priests and to implore the protection and loving care of Our Lady, Mother of all priests, for all her priestly sons. With the coming of midnight on the 19 June 2020, the entire world, by then, will have been encircled in prayer for our priests on this The Annual Rosary Relay Day.

Find the location nearest to you:

a B-24 bomber was shot down by enemy fire over Hansa Bay, New Guinea, carrying my uncle John and 10 other crewmen. They were officially MIA until Good Friday of 2018, when the team of Project Recover discovered the plane nearly 200 feet under the surface of the bay.

I had stopped by the family cemetery plot on that same Good Friday on my way to a prayer vigil in Saint Paul. As I cleared snow from the tombstones, I began thinking about uncle John and how little we knew about him. I decided to walk the cemetery praying a rosary for all the deceased in my family. Little did I know that, on that very day, his plane had been discovered.

More details about the discovery, and the consequent gathering of the families of the deceased crew, at the links below.

in memory of uncle John

They shall grow not old, as we that are left grow old:
Age shall not weary them, nor the years condemn.
At the going down of the sun and in the morning
We will remember them.

-Excerpt from “For the Fallen” by Laurence Binyon

Project Recover: The Finding of ‘Heaven Can Wait’ B-24 from Kyle McBurnie on Vimeo.

NOTE: I’m currently working on a new blog post about Uncle John… specifically, the things I learned from my visit to Omaha in May of 2019 for the Defense POW/MIA Accounting Agency regional meeting. I was able to sit down with a casualty officer, analyst, and historian to review what they know about what happened to the crew of Heaven Can Wait on March 11, 1944.

On May 13, 1917, Mary appeared to three shepherd children in the hills of Fatima, Portugal.

It was an amazing week. I was digging through my photo albums a while ago, and it gave me the idea of blogging about my overseas travel adventures: the semester I spent in Austria back in 1992, the summer I spent in England in 1993, and the travels in Europe and Israel during my seminary studies in the fall of 1996. 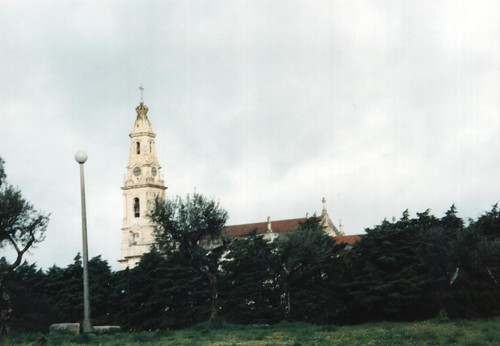 Today I’m posting a link to the document about Fatima published by the Congregation for the Doctrine of the Faith in the year 2000. It includes several elements about the secrets of Fatima and their interpretation. The theological commentary – which has a great discussion of the proper understanding of private versus public revelation – was written by then-Cardinal Ratzinger. Here’s a teaser from the end of his analysis:

What is the meaning of the “secret” of Fatima as a whole (in its three parts)? What does it say to us? First of all we must affirm with Cardinal Sodano: “… the events to which the third part of the ‘secret’ of Fatima refers now seem part of the past”. Insofar as individual events are described, they belong to the past. Those who expected exciting apocalyptic revelations about the end of the world or the future course of history are bound to be disappointed. Fatima does not satisfy our curiosity in this way, just as Christian faith in general cannot be reduced to an object of mere curiosity. What remains was already evident when we began our reflections on the text of the “secret”: the exhortation to prayer as the path of “salvation for souls” and, likewise, the summons to penance and conversion.

I would like finally to mention another key expression of the “secret” which has become justly famous: “my Immaculate Heart will triumph”. What does this mean? The Heart open to God, purified by contemplation of God, is stronger than guns and weapons of every kind. The fiat of Mary, the word of her heart, has changed the history of the world, because it brought the Saviour into the world—because, thanks to her Yes, God could become man in our world and remains so for all time. The Evil One has power in this world, as we see and experience continually; he has power because our freedom continually lets itself be led away from God. But since God himself took a human heart and has thus steered human freedom towards what is good, the freedom to choose evil no longer has the last word. From that time forth, the word that prevails is this: “In the world you will have tribulation, but take heart; I have overcome the world” (Jn 16:33). The message of Fatima invites us to trust in this promise.

Today is Divine Mercy Sunday, a time to remember in a special way the message of our Lord to St. Faustina Kowalska, a simple nun from Krakow in early part of the 20th century.

Father Michael Gaitley, MIC, describes the Divine Mercy message succinctly and well, with a particular message for this year’s celebration:

…At no time and in no historical period — especially at a moment as critical as our own — can the Church forget the prayer that is a cry for the mercy of God amid the many forms of evil which weigh upon humanity and threaten it. Precisely this is the fundamental right and duty of the Church in Christ Jesus, her right and duty towards God and towards humanity. The more the human conscience succumbs to secularization, loses its sense of the very meaning of the word “mercy,” moves away from God and distances itself from the mystery of mercy, the more the Church has the right and the duty to appeal to the God of mercy “with loud cries” (cf. Heb. 5:7). These “loud cries” should be the mark of the Church of our times, cries uttered to God to implore His mercy, the certain manifestation of which she professes and proclaims as having already come in Jesus crucified and risen, that is, in the Paschal Mystery. It is this mystery which bears within itself the most complete revelation of mercy, that is, of that love which is more powerful than death, more powerful than sin and every evil, the love which lifts man up when he falls into the abyss and frees him from the greatest threats.

When I was studying in Europe as part of a semester-abroad program in 1992, I had a chance to visit Krakow and visit the convent where Sister Faustina lived. I remember leaving from Steubenville’s Austrian campus early that day — which meant skipping out of the end of a talk given by Cardinal Schönborn, who was reading to us from the latest draft of the Catechism of the Catholic Church. Just one more thing to lay before God’s mercy…

When we arrived in Krakow, it was hard to find Sr. Faustina’s convent — although the fact that none of my classmates spoke Polish might have had something to do with it… We just pulled out our holy cards with the image of the Divine Mercy on it, and first were directed to the wrong church! But we eventually got there, and the sisters were kind enough to show us around… we saw the sisters’ cemetery, the chapel that contains the image, and the tomb of St. Faustina. Here are a few photos… 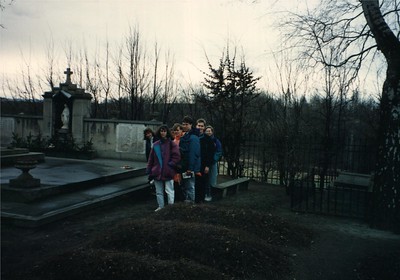 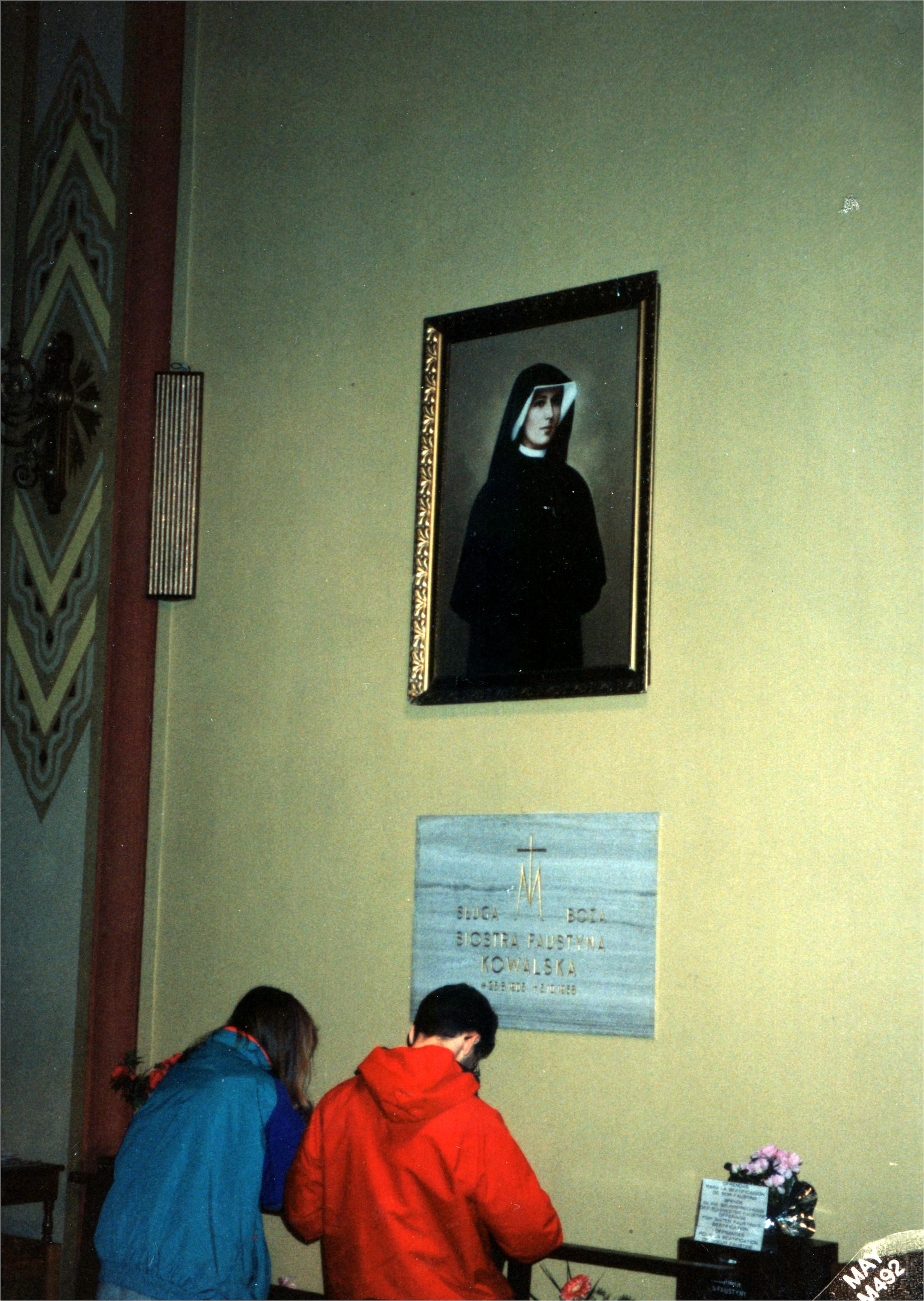 Praying at the tomb of St. Faustina 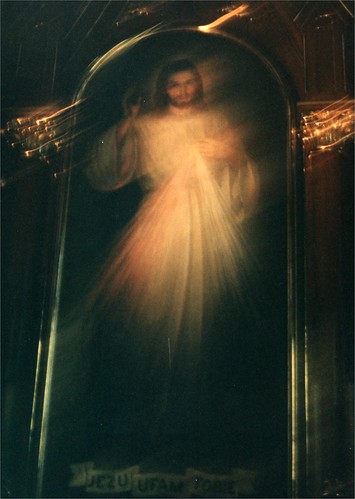 The Divine Mercy image in the chapel 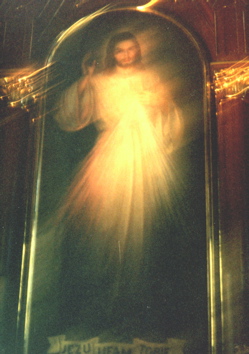 The devotion to Divine Mercy is a powerful one, and it has spread far and wide through the Church in a very short time.

I once visited the convent in Krakow, Poland where Saint Faustina Kowalska lived and prayed. St. Kowalska is the nun who received the devotion to the Divine Mercy in a series of private revelations from Jesus in the early part of the 20th century.

This year, the novena takes on a special significance, as a way to spiritually adopt people dying alone with the coronavirus:

Inspired by a scene in the Diary of St. Faustina, where she was spiritually transported by the Lord in order to pray the Chaplet of Divine Mercy at the bedside of a dying man she did not know, I would like to suggest that we would each commit to praying the Divine Mercy Chaplet each day for the days ahead to spiritually place ourselves beside one of the poor unfortunate men and women who are dying alone in hospitals all over the world because of this virus, some of whom are perhaps not well prepared spiritually for their earthly end. If families were to pray it then several dying persons would be spiritually adopted with the one prayer of the Chaplet.

Wishing you a blessed Triduum and a happy and holy Easter!