On July 26, 1970, at the church of Saint John the Baptist in Excelsior, Minnesota, the Rev. Vincent O’Connor poured water over my forehead and baptized me in the name of the Father, the Son and the Holy Spirit.

I’ve decided to make a point of celebrating the anniversary of my baptism. I guess Pope John Paul II thought this sort of thing was a good idea, as did a fourth-century saint:

We should celebrate the day of our baptism as we do our birthday! All Christians should reflect on the meaning and importance of their own baptism. – John Paul II, 1/12/1997

My mom is amazing. I’m the youngest of ten kids, and somehow she saved a box of various items from my baptism! I was digging through my books the other day and stumbled across all of this memorabilia… baptismal cards printed for the occasion; cards from godparents, family and friends; a telegram from my uncle; a burlap banner, complete with bright orange and green felt letters proclaiming a groovy Gospel message; a family Christmas card that was created after the event… My parents had the event filmed on Super 8 film and recorded on audio tape as well.

I have the script my parents wrote for the occasion (that’s right, they scripted the liturgy)… apparently it involved most of my nine brothers and sisters. And I have been given to understand that Fr. O’Connor played guitar during the celebration.

It was a tandem baptism, shared with good friends of our family, the Regans. Bobby Regan and I were both born around the same time, so the families decided to celebrate the baptisms together.

I was particularly moved by some of the notes I found among the archives:

from my godparents:
Dearest little Clayton,
We are so happy to be your godparents, and through you to reaffirm that we’ll go “one more round, mankind.” Your parents are beauties and you are blessed as they are blessed. Much love, Gordy & Grace

May he grow in wisdom, grace and age and be worthy of his earthly and heavenly family. Bob and Helen

from one of my aunts:
Dear Mary, Jim and children:
Thank you for a very wonderful day. It was an insight to generous, selfless, meaningful Christian lives. Gratefully, Pat and Gen

from a friend of the family:
Dear Mary and Jim,
Clayton has really come into a beautiful and loving Christian fellowship. He is a very lucky young man to have been received so well into his new community. John and I felt it an honor to be a part of your special day. Thank you for all the “giving” you have sent our way. Love in your family! Cynthia O’Halloran

and then the telegram from my uncle:

Stumbling across all of this is quite humbling. It’s hard to know how to express gratitude for such a great gift, given to me even before there was any way of responding. It reminds me of the very gratuity of God, the great economist of the heart… who doesn’t measure, or wait for any kind of response.

In his Letter to Families, John Paul II wrote profound things about the family as the lasting “horizon of one’s existence” and the relationship between human life and life in God:

It is for themselves that married couples want children; in children they see the crowning of their own love for each other. They want children for the family, as a priceless gift. This is quite understandable. Nonetheless, in conjugal love and in paternal and maternal love we should find inscribed the same truth about man which the Council expressed in a clear and concise way in its statement that God “willed man for his own sake.” It is thus necessary that the will of the parents should be in harmony with the will of God. They must want the new human creature in the same way as the Creator wants him: “for himself.” Our human will is always and inevitably subject to the law of time and change. The divine will, on the other hand, is eternal. As we read in the Book of the Prophet Jeremiah: “Before I formed you in the womb I knew you, and before you were born I consecrated you” (Jer 1:5). The geneaology of the person is thus united with the eternity of God, and only then with human fatherhood and motherhood, which are realized in time. At the moment of conception itself, man is already destined to eternity in God. – Letter to Families, paragraph 9

All I can say is that I am very grateful for my parents. It would have been easy for them to have seen a tenth child simply as a burden or another mouth to feed. But instead they chose to see it as an occasion of joy and hope, and left all of these reminders behind for me to discover later.

So here’s to fifty years of life in my earthly family, and in the family of the Trinity! 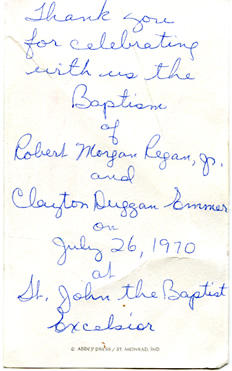