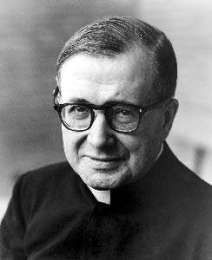 Today is the feast day of St. Josemaría Escrivá, founder of Opus Dei. He died on this day in 1975.

Among other qualities, his solicitude for priests was thorough and magnanimous:

His love for the priesthood and for priests was transparent. In 1941, he had to leave town for one of these retreats in Lérida. Although his mother was ill, he decided to go anyway because the doctor did not think it was serious.

“Could you offer your sufferings for the work I’m going to do?” he asked her.

As he left the room he heard her murmur: “This son of mine…”

Arriving at the seminary of Lérida, he had knelt before the tabernacle, saying: “Lord, look after my mother, for I am taking care of your priests.”

Two days later, the thought of his mother still very much in his heart, he proceeded to preach on the role of the priest’s mother. It occurred to him to tell his listeners that her role was so important that she should not die till the day after the death of her son the priest.

After the meditation he remained recollected in prayer in front of the Blessed Sacrament. Then the apostolic administrator of the diocese, who was making the retreat, came up to him somewhat disconcerted and said in a low voice: “Álvaro del Portillo would like you to phone him in Madrid.”

His mother, Dolores, had died.

Years later, Saint Josemaría affirmed, “I have always thought that our Lord wanted that sacrifice from me, as an external proof of my love for diocesan priests, and that my mother especially continues to intercede for that work.”

Here are some additional resources on St. Josemaría Escrivá:

I especially recommend the novena for work… which has two dimensions: praying to find a job, and praying to do a good job.  Both have been very profitable for me in the past.

I’ve also written a number of his sayings in my prayer journal, and they’ve formed the basis for the Stations of the Cross that I assembled back in 2004.