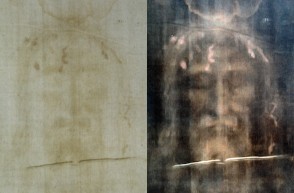 This week, it was announced that the Shroud of Turin will be on display on Holy Saturday (April 11th) so the faithful can view it via livestream as they pray for Christ’s grace during the pandemic.

Catholics around the world will be invited to pray virtually before the Turin Shroud on Holy Saturday as the world struggles to contain the coronavirus pandemic, Church officials have said.

The Shroud, which bears the image of a crucified man and has been venerated for centuries as Christ’s burial cloth, will be displayed via livestream at 5pm local time April 11.

Archbishop Cesare Nosiglia will preside over a liturgy from the chapel of Turin cathedral where the Shroud is kept in a climate-controlled vault. It will be broadcast live on television and social media.

Today, I have posted the audio of a talk given in 2005 about the Shroud of Turin by Jack Sacco. Sacco, an engineer and writer by trade, interviewed the multi-disciplinary group of scientists who were given access to study the Shroud in 1978. The venue for the two-hour presentation was Saint Monica’s Catholic Church in Santa Monica, California, and the speaker was introduced by Father Willy Raymond, CSC.

“Many of us [scientists] were, at first, quite confident of our technical adequacy. Some may have even been cocky. But none of us survived this extraordinary voyage into the unknown without becoming more humble and more aware of the dimensions of our ignorance. Scientific hubris may have been our mutual sin at the outset, but now we have learned better.”