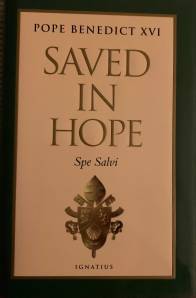 Lately I’ve been thinking about hope: in particular, hope as a theological virtue. Given all of the sexual, financial and theological scandal in the Church in recent months, and all of the political scandal in the culture, many of the temptations I face today are temptations against hope. The recent popularity of the movie Joker, for example, impressed me as a troubling bellwether of a climate of despair. And in the Church, even in quarters in which the virtue of faith seems evident, often a corresponding hope is not manifest. Sins against charity are usually easy to spot, but sins against hope tend to be more subtle. The days are dark, and the temptations to let the light of hope be extinguished are legion.

The Catechism of the Catholic Church defines hope (and defects of hope) as follows:

2090 When God reveals Himself and calls him, man cannot fully respond to the divine love by his own powers. He must hope that God will give him the capacity to love Him in return and to act in conformity with the commandments of charity. Hope is the confident expectation of divine blessing and the beatific vision of God; it is also the fear of offending God’s love and of incurring punishment.

2091 The first commandment is also concerned with sins against hope, namely, despair and presumption:

By despair, man ceases to hope for his personal salvation from God, for help in attaining it or for the forgiveness of his sins. Despair is contrary to God’s goodness, to his justice – for the Lord is faithful to his promises – and to his mercy

2092 There are two kinds of presumption. Either man presumes upon his own capacities, (hoping to be able to save himself without help from on high), or he presumes upon God’s almighty power or his mercy (hoping to obtain his forgiveness without conversion and glory without merit).

In order to explore the topic of hope more deeply, in the coming weeks I’ll be returning to meditate on Pope Benedict XVI’s encyclical Spe Salvi (“Saved in Hope”), which was released on November 30, 2007.

In 2008, I hosted three evenings of discussion of Spe Salvi. All three discussions were audio recorded and edited (roughly!) and are available as audio podcasts:

2 thoughts on “the virtue of hope”