The moral life proposed in the Gospel is connected to a promise. What is the character of this promise? In paragraph 12 of Veritatis Splendor, Pope Saint John Paul II takes up this very question. 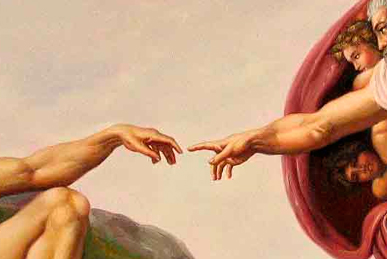 But there is more. Not only are the requirements of goodness woven into our very existence as human beings; additionally, Goodness Himself comes in pursuit of us and reveals Himself to us in the course of human history. Goodness wants to be in continuous relationship with us, and thus extends to us a covenant. In the history of Israel, this initiative appears in a particular way when God reveals the Decalogue (ten commandments) to Moses. These commandments are the terms of the relationship… the way in which we can remain in relationship with the good. They are not arbitrary conditions on the part of God, but simply a fleshing out into words of the law written on our hearts at creation. In the Decalogue, God says to us, in effect: Here is who I am; here is who you are, both personally and corporately; and here is how you and I can remain in communion with each other.

And there is still more. Through the New Covenant, the requirements of this relationship will be written anew and definitively upon the human heart. The Pope quotes several passages in the Old Testament that prefigure this development, particularly from the prophets Jeremiah and Ezekiel.

Consequently, after making the important clarification: “There is only one who is good,” Jesus tells the young man: “If you wish to enter into life, keep the commandments” (Mt 19:17). In this way, a close connection is made between eternal life and obedience to God’s commandments: God’s commandments show man the path of life and they lead to it. From the very lips of Jesus, the new Moses, man is once again given the commandments of the Decalogue. Jesus himself definitively confirms them and proposes them to us as the way and condition of salvation. The commandments are linked to a promise. In the Old Covenant the object of the promise was the possession of a land where the people would be able to live in freedom and in accordance with righteousness (cf. Dt 6:20-25). In the New Covenant the object of the promise is the “Kingdom of Heaven”, as Jesus declares at the beginning of the “Sermon on the Mount” — a sermon which contains the fullest and most complete formulation of the New Law (cf. Mt 5-7), clearly linked to the Decalogue entrusted by God to Moses on Mount Sinai. This same reality of the Kingdom is referred to in the expression “eternal life,” which is a participation in the very life of God. It is attained in its perfection only after death, but in faith it is even now a light of truth, a source of meaning for life, an inchoate share in the full following of Christ. Indeed, Jesus says to his disciples after speaking to the rich young man: “Every one who has left houses or brothers or sisters or father or mother or children or lands, for my name’s sake, will receive a hundredfold and inherit eternal life” (Mt 19:29).

The commandments open a doorway for us… revealing new possibilities for grace to inhabit our lives. As the Pope says, they give us an inchoate (“just begun” or “rudimentary”) share in the full following of Christ.

In the Old Testament, the promise was connected to the gift of a land, and in the New, to the gift of a kingdom: the kingdom of God… eternal life. In proposing the way of perfection, Jesus does not ask us to give up our lands without promising us a new land, a new dwelling place: his own heart.

One thought on “if you wish to enter into life…”